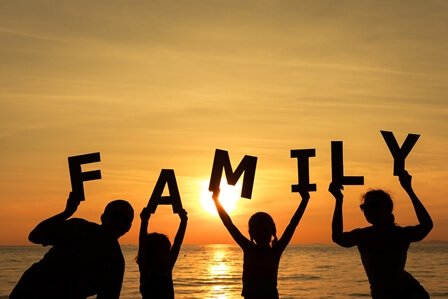 Collocation means a natural combination of words; it refers to the way English words are closely associated with each other. Learning collocations will also help you to increase your range of English vocabulary.

When you make mistakes with collocations, the other person will usually understand you – but your English won’t sound “natural” – because it’s different from the way a native speaker would say it.

Although it’s possible to communicate successfully with incorrect collocations, using collocations correctly can help you speak more fluently. We suggest completing one lesson in this book per day, but of course you can study at your own pace.

Let’s begin our study of collocations by learning some common expressions about the family.

Your parents and siblings (brothers and sisters) are your immediate family – and your extended family includes all your relatives – uncles, cousins, great-aunts, etc.

You can use a family tree to diagram the relationships among your family members. A person who is related to you by a long series of connections can be called a distant relative.

If you’re lucky, you have a loving family or a close-knit family – these expressions refer to a family that has good relationships, where everyone loves each other and helps each other. If you were raised in a loving family, then you probably had a carefree childhood – that means you had nothing to worry about when you were young.

On the other hand, a family in which the relationships are bad or unhealthy can be called a dysfunctional family. If the children experience abuse, poverty, or problems with the law, we can say they had a troubled childhood.

Perhaps the parents went through a bitter divorce – that means a separation in which there were bad/angry feelings between the husband and wife. It’s also possible to have a messy divorce, with a prolonged legal battle involving lots of conflicts about the separation of the former couple’s assets (money and possessions). The decisions about the separation of assets are made in the divorce settlement. A family in which there are divorces or separations is sometimes called a broken home.

Sometimes the mother and father fight over custody of the children – that refers to who has the primary responsibility of caring for the kids. A judge can grant joint custody – that means the exhusband and ex-wife share the responsibility – or sole custody to only one parent. For example, a judge might award sole custody to the mother, and the father has to pay child support – regular payments to help with expenses for the kids.

If it was a mutual divorce/separation – that means the ex-husband and ex-wife agreed to separate without fighting – then they will probably stay on good terms with each other (meaning to have a polite relationship without conflicts).

If a woman gets pregnant without being married or in a relationship, then she will become a single mother. Some women in this situation choose to have an abortion, and others prefer to give the baby up for adoption. The time when the baby is planned to arrive is called the due date – you can also say the baby is due in mid-October, for example.

After the woman has the baby (or gives birth to the baby), the baby is given to the adoptive parents, who will raise the child or bring up the child as if it was their own. Sometimes, when the adopted child is older, he or she tries to find their birth mother (biological mother).

Choose the best word to complete each sentence: