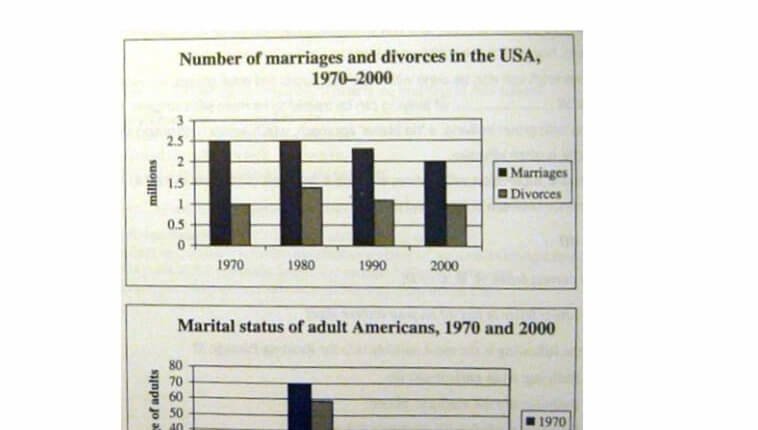 Let us analyze the IELTS writing task 1 response of a candidate who was preparing for IELTS Academic exam.
The bar chart depicts marriage and divorce rates in the USA for the years 1970, 1980, 1990 and 2000. This is accompanied by an another bar chart illustrating percentage of American adults who were married, never married, widowed and divorced in the years 1970 and 2000.

As it can be seen from the bar chart, in the year 1970 there were 2.5 million marriages and 1 million divorced people in the USA. In the next decade, total number of married people remained the same as in the previous decade, however, the divorce rates were increased by 0.4 million compared to 1970. In the year 1990, marriages decreased in number by 0.25 million in comparison to last two consecutive decades, likewise, divorce rates also dropped down to just above 1 million as compared to 1.4 millions in 1980. In 2000, there were 2 million married and 1 million divorced people in the USA

Overall, percentage of married people decreased since 1970 and percentage of unmarried increased by the 20th century. However, divorce rates remained fairly stable for the period in question.

Now, let us find out the strengths and areas of imrpovement to decide the overall band score for the above IELTS writing task 1 response.

The main feature of the question is well explained which provides good introduction to the problem statement.

Last statement can be:

Sentence connector (overall) is used and general idea of the question is explained.

The candidate, though mostly writes free from grammar and tense errors, but there are a few noticeable mistakes related to forming passive sentences, punctuation and others.